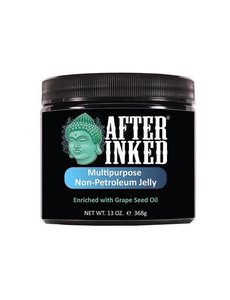 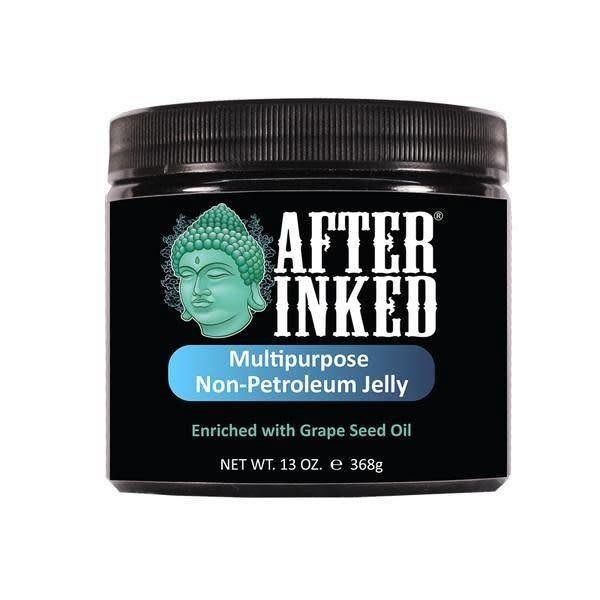 NPJ Multipurpose Non-Petroleum Jelly for Tattoos, Piercings, PMU and everything in between! Read more

NPJ Multipurpose Non-Petroleum Jelly for Tattoos, Piercings, PMU and everything in between
Lubricates, Soothes, Softens, Glides!
After Inked® NPJ Non-Petroleum Jelly moisturizes the skin by forming an effective barrier against dryness.
It is the perfect Vegan ointment without any Petrolatum! Enriched with Grape Seed Oil.
AFTER INKED® NPJ MULTIPURPOSE JELLY IS AWESOME FOR TATTOOS, PMU AND PIERCINGS:
A. Before, During & After the Tattoo Procedure!
Better glide, optimal grip! Less is more! It doesn’t melt like butter!
After Inked ® for every stage of your tattoo procedure!
– BEFORE the tattoo: After Inked® NPJ lubricates, softens and prepares your skin.
– DURING the procedure: After Inked® NPJ provides better grip of the skin and optimal glide, optimizing time. It doesn’t remove the stencil and it doesn’t clog the tubes. Tattoo artists love it! A little bit goes a long way!
– AFTER the tattoo procedure: Use After Inked® NPJ as aftercare ointment and then pamper your tattoo with After Inked® Tattoo Moisturizer to keep your tattoo moisturized and vibrant.
Bring your tattooing procedure to the next level!
B. Piercing Conditioner
Use After Inked® Non-Petroleum Jelly to soothe the newly healed stretched skin and as a lubricant when inserting larger gauge jewelry.
Features:
Before, During & After the Tattoo Procedure
Better glide & optimal grip, optimizing time!

Made in USA of global ingredients